Click Here! to find out the easiest way to learn Arabic without spending hundreds of dollars.

So we all know that the job market is wide open for those with a knowledge of the Arabic language after the 9/11 attacks and the war in Iraq. The only problem now is learning it. Not such a small problem as Arabic is one of the hardest (if not the hardest) languages for native English speakers to learn. And Universities in the US are still very lacking when it comes to teaching Arabic even after the US’s huge demand for Arabic speakers has become common knowledge. A search of CollegeBoard.com reveals only 18 universities in the US that offer a major in Arabic and the University of Georgia is the only university in the south that does. Teaching yourself with the help of courses and the internet is the best way to learn Arabic, but when you look at the most prominent courses like Rosetta Stone and Pimsleur you’ll see that they cost hundreds of dollars. You don't have to spend that much. For a way to learn Arabic without spending a week's paycheck follow this link.
Posted by The Arabic Student at 10:35 AM 10 comments:

In my experience the best way to continue learning a language once you have the basics down is to have a listening passage with a transcript included. If you just have a listening passage with no transcript there are bound to be some, if not a lot, of words and phrases that you don't know. With the similarity of many of the Arabic letters (to native English ears anyway) sometimes you won't be sure whether the word that you don't know is spelled with a س (seen) or a ص (saud), a د (del) or a ض (daud), making the word hard to look up in a dictionary. If you have a transcript of the passage it will save you a lot of wasted time trying different combinations of letters until you stumble upon the correct one that gives you a meaning that makes sense with the rest of the sentence. The following websites I recommend for intermediate students, but beginners who at least know what sounds the letters make may benefit as well.
This site was made by the Defense Language Institute which is the place that the US government sends military members to learn languages. Luckily it is a free site open to everyone. On this site you can search for listening or reading passages based on your skill level. GLOSS has a large selection of passages that will keep you busy for months. They go from DLPT level 2 to level 3 in Arabic. Some of the languages go up to level 3+ passages, and Spanish has some level 4's. All of them have a listening portion and a transcript.

There is a lesson with each one that you can follow if you choose, but most of the time I simply listen to them 2 or 3 times without looking at the transcript and then I go back and dissect the passage while following along with the transcript and looking at the English version to make sure I'm translating the Arabic correctly. If there are any parts that I don't fully understand I'll replay those parts until I can figure out how the sentence is working (i.e. which verbs are being done by which nouns, which nouns the adjectives are modifying, etc). GLOSS is the single most beneficial site on the internet for intermediate students looking to break into the advanced level and being able to listen to the news with ease.

This is a site with the same type of passages that GLOSS has which is due to the fact that it was also made by the US government. It has 57 Arabic passages also from level 2 to 3.

Watching TV programs in Arabic will help you get a bit of immersion in the language. SCOLA offers several Arabic programs. Most of the programs are news, but sometimes they have regular shows in between news broadcasts. There's no transcript included which makes it hard to learn from if you're a beginner in the language, but intermediate students should get some benefit from watching Arabic TV broadcasts.
Posted by The Arabic Student at 11:38 PM 3 comments: 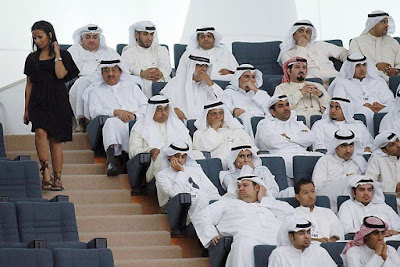 I came across this picture when I wasStumbling a few days ago (which is frickin awesome tool if you haven't heard about it). Those don't seem like looks of disapproval to me. Women like that are another benefit of knowing Arabic ;).
Posted by The Arabic Student at 1:16 PM 1 comment:

Email ThisBlogThis!Share to TwitterShare to FacebookShare to Pinterest
Labels: humor

Arabic seems like an impossible language to learn for most English speakers, but this is due mostly to how strange it sounds. Once you get past the sounds that we don't have in English the language is rather logical and the words are easy to remember. The vast majority of the words in Arabic come from a 3 letter root. You'll have a 3 letter root and variations of that root make different words that are all similarly related. For example, كتب (pronounced kataba) means "he wrote". مكتب (maktab) is a desk. مكتبة (maktaba) is a library. كتاب (kitaab) is a book. There are a lot more words that come from the root kataba, but you get the idea. Sometimes you'll have two words that aren't related at all but which have the same root which can be a little annoying, but most of the time there is some logic involved which really helps in memorizing words. In this respect Arabic is more logical than English. A foreigner learning English has to learn 4 totally different sounding, unrelated words; "he wrote", "desk", "library", and "book", while the Arabic words for these things are all related.

The grammar of Arabic isn't hard to grasp either. The most common way to structure an Arabic sentence is VSO (English is SVO). In Arabic you'd say, "Threw the boy the ball" if you wanted to say the English, "The boy threw the ball." You don't have to say it this way though. You can structure the sentence just like you would in English and they will still understand you. It's just more common to put the sentence in VSO form.

Verb tenses are also much easier in Arabic than they are in English. Easier than Spanish also. I remember trying to learn the Spanish verb tenses in high school and I never knew when to use one past tense or the other past tense. In Arabic there's no worrying about that because it only has 3 tenses (4 if you count the imperative). They are simply past, present, and future. There's no past-subjunctive-progressive whatever. To make a verb future tense all you have to do is put an "s" sound on the front. For past, all of the 3 letter roots are already in the past tense, so you don't have to change them for past tense. For present tense it's a little more complicated, but not much. You put an أ (pronounced "a" as in apple) in front of the root for 1st person present (I write), a ي (pronounced "ya" as in yak) in front for 3rd person masculine (he writes), an a ت (pronounced like "t") in front for both 2nd person and 3rd person feminine (you write and she writes). Those are the basics of the tenses. There is more about the tenses that is slightly more complicated but still really simple compared to other languages.

There are a few sounds in Arabic that English doesn't have, such as the خ which sounds like someone trying to cough up some phlegm and the ق which is like a "k" but is pronounced in the back of the throat. There are also 2 "s" sounds and 2 "d" sounds that are very hard for native English speakers to tell the difference between even with a lot of exposure to the language. Even if you can't tell the difference between some of the sounds you can still know from context what is being said.
Posted by The Arabic Student at 1:01 AM 5 comments: