Egyptian Saying About Men and Money

Every culture has sayings about money. I learned this one while watching عايزة أتجوز on MBC's website. The show is about a girl who can't find a husband. The context for the clip is that she finally meets a man who wants to marry her. He's a trash man (زبّال) and really annoying, but he has a lot of money because he owns the trash company. She tries to convince herself that money is all that matters to her with this phrase: الراجل ما يعيبوش إلا جيبه (arragil ma ya'eeboosh illa gaybu) which means, "A man has no shame except his pocket." Basically, it doesn't matter what a guy is like as long as he has money. Here's the clip for some context and how to pronounce it:

This clip is when the trash man is asking Ola (عُلا) to marry him. He's listing his qualifications.

A man has no shame except his pocket, and my pocket is full. (He's rich.)
Posted by The Arabic Student at 8:25 PM 6 comments:

Can You Get Rid of Your Accent? 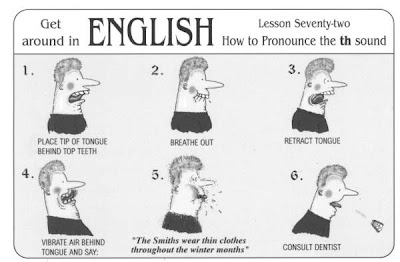 Accent is something people ask me about from time to time. They want to know how I learned to speak with a good accent in the Arabic language as this is a part of language that most learners can't seem to nail down. This is the most difficult question to answer with regard to language learning. Why do some people have foreign accents when speaking a 2nd language while others are able to minimize or completely eliminate their accent. I haven't eliminated my accent completely, but I've minimized it enough so that if I'm speaking to a native Arabic speaker they will usually just think I am from a different Arabic country than they are. For example, in Jordan people thought I was Lebanese or Syrian or maybe that I had 1 parent who was Arab and another American.

No one is sure why some people have accents and others do not. A person can move to another country when they are 30 and live there until they die and have an accent their entire life while others eliminate their accent very soon after starting to learn the language. I believe it has to do with the music of the language. I'd be willing to bet that musicians are more likely to get rid of their accent than others. Language is a lot like music in that there are different stresses, intonations, and rhythms. Good musicians have an ear for these things. You can, however, learn to be a good musician as well as a good mimicker of accents.

Most people learn a language to communicate, but I wanted to learn Arabic because it just sounded cool. It's sounds were nothing like English and that exotic factor appealed to me. That was my number 1 reason for choosing it. And while learning Arabic the main thing I focused on was where the stress went in words and sentences. It may sound corny and ingenuous, but I viewed Arabic as a song. I was slower to get the meaning of words and slower to understand what people said to me than the others I was learning with, but my pronunciation was always spot on because I viewed the language as music, as a kind of chant. Equally important to me as the definition of a word was being able to reproduce it the way the speaker said it, exactly the way we will try to sing a song on the radio the way the singer himself sings it, putting the emphasis where the singer does and drawing out the syllables that the singer draws out.

I think some language learners go into a new language oblivious to these kinds of things. They learn the meanings of words and the grammar, but pronunciation is secondary. Pronunciation needs to be focused on, at least in the beginning, as much as the meaning of the language. In fact, I would not even go over what the words mean until after spending a few weeks on how to pronounce things and where emphasis goes on the syllables. This will keep the students from focusing on the meaning and ignoring pronunciation since you aren't giving them any definitions yet. In this way Arabic will be viewed as a song first and as a language second. After a few weeks when you start to introduce meaning into this way of singing called Arabic, the students will be versed in how things are supposed to sound.

An Iraqi friend of mine who speaks English fluently, but can immediately be pointed out as a foreigner because of his accent, showed me a program that goes deeper into all of the stresses, rhythms, and flow of language in order to get the correct accent. He says it's really helped him with his accent and I have noticed a difference in the way he speaks as well. I guess sometimes all it takes it raising a persons awareness to the little things they are overlooking. The program he uses is called The American Accent Audio Course and I really wish there was one for Arabic as well. (Hmmm, this gives me an idea :P)

I mention the program because I know there are native Arabic speakers who read this blog and some may benefit from it. I took a look at the program and it's a pretty advanced course which covers all the little things that give someone away as not being a native speaker, such as the correct intonation and stress on different words in the sentence and how these can change meaning or just make the sentence sound weird to Americans, the American 't' that can be pronounced as 't' or 'd' depending on where it is located in the sentence, and a lot more little things that American English speakers take for granted and so would probably never bring up in a class because they don't even notice them themselves. You can get the course here. If you use it please let me know if it helps you as much as it helped my friend.
Posted by The Arabic Student at 11:50 AM 7 comments:

Fifa 12 will have Arabic audio

I was listening to the Saudi Gamer podcast and they announced the news that EA has chosen to give the game Fifa 12 Arabic audio commentary and menus. EA hired two actual soccer commentators, a Tunisian Issam Chawali (عصام الشوالي) and a Saudi Abdullah Alharbi (عبدالله الحربي). This choice makes sense as the Arab world is a huge market for all things soccer. I'm really excited about this step and I hope it sets a precedent for more video games to have audio in Arabic. I've always been jealous of people learning Japanese because they can augment their learning by playing a lot of video games in Japanese, but for Arabic you don't have that option. I might actually buy this game for my Xbox to learn some soccer jargon even though I'm definitely not a soccer fan. I'm sure it's more exciting than watching an actual game though :P.
Posted by The Arabic Student at 8:14 PM 9 comments: