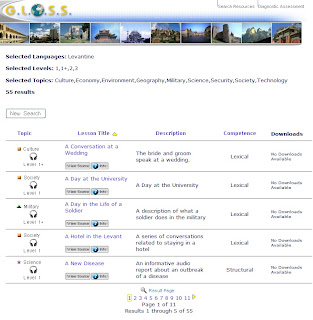 
There are also authentic materials from the media on GLOSS though, so you'll find something that suites you. And best of all there are transcripts of what is being said. That way you don't have to wonder if you're hearing the word correctly or not. Some of the audio is very distorted and low quality which is good for advanced learners in my opinion, but if you're just beginning it can be frustrating. If you find a clip where the audio quality is bad you can click the button at the bottom labeled "alternate audio" to get the audio of someone reading the text. I used GLOSS a lot when I was studying MSA and now that they have dialects I plan to go through all of those lessons too. I don't actually do the lessons. I just open the audio and transcript and go through it until I can hear and understand everything. If you want you can go through the questions they ask, but personally I haven't found them to be very useful. GLOSS is also starting to add videos with transcripts and they have 22 right now for MSA, but currently there are no videos for the dialects.
Posted by The Arabic Student at 5:58 PM 7 comments: 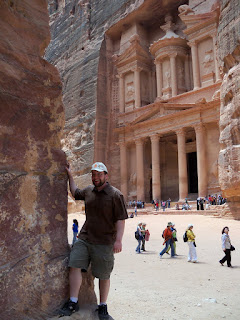 All in all I am very pleased with my time in Jordan. It's a great country and even though it is in smack dab in the center of the Middle East and is surrounded by countries plagued by violence it has an extremely low crime rate and the government takes preventing terrorism very seriously. When we went to eat in a 5 star hotel the taxi dropping us off was wiped with a cloth on the steering wheel and the dashboard. We asked the taxi driver why they did that and he told us that it was to test for traces of explosives. Jordan realizes that terrorism is bad for tourism.
Posted by The Arabic Student at 4:35 PM 11 comments: