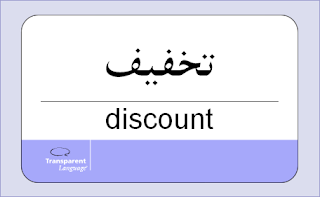 I've recently been looking at Persian (Farsi) because I had heard that if you knew Arabic it wouldn't be hard to learn. This seems to be the case. So far all I have done is look at about 500 flashcards and listened to a repeating news broadcast to try to get used to how the language is spoken. I know literally nothing about the way sentences work in Persian, but from the vocabulary alone it doesn't seem like it should take too long. About 30-40% of the words that I'm seeing either have a relation to their Arabic equivalent or are the exact same word (except for pronunciation). A few words I've found to be the same are:

Those are what I found looking through my flashcards for a few minutes. There are also a lot of words that don't have the exact same meaning, but are closely related to the Arabic. With these kind of words, if you already know Arabic you have something to hang the new definition on in your mind. Examples of these types of words are:

- "Sculpture" in Persian is مجسمه سازى. Ignoring the سازى part which doesn't have anything to do with Arabic, you can look at مجسمه which has the root جسم which has to do with the body or embodying something. Knowing that makes the new Persian word easy to remember since you can think of a sculpture as an embodiment of something.

- A "Drawing" or "Painting" in Persian is نقاشى. If you look to the Arabic root نقش the Persian meaning is easy to remember since نقش means "to engrave". There's an Arabic saying التعلم في الصغر كالنقش على الحجر which means something like, "If you learn something when you're young it's engraved in stone." There's probably an exact equivalent to that saying in English but I'm not sure what it is. Anyway, there isn't much difference between an engraving and a drawing so it's easy to remember.

- In Arabic عكس means “opposite”. In Persian عكاس means “photographer”. In Arabic that's literally someone who makes opposites which makes sense because back in the days of film the negatives were opposites of the picture you took. Now I don’t know if that’s what was intended when Persian took that word, but it still helps me to remember it.

- Another photography word I saw was ظاهر كردن which means “to develop a picture”. It’s easy to remember if you know Arabic because the verb ظهر means “to become visible” or “to appear.”

Even though Persian and Arabic are not in the same language family, because of the Arab occupation of Iran along with Islam about 30-40% of the words in Persian are either Arabic words or derived from Arabic roots.
Posted by The Arabic Student at 7:51 PM

Email ThisBlogThis!Share to TwitterShare to FacebookShare to Pinterest
Labels: Persian

You have a great website! Keep up the good work.

I am also about to embark on learning Farsi after gaining a proficiency in Arabic.

The other day I picked up an introductory grammar to Urdu and was amazed at how many words were Arabic. With MSA as a base, it should be easier for us to pick up other languages. Theoretically.

Nice post.
It's true Persian, Urdu and Arabic share a great percentage of the lexicon. This is almost entirely because of the borrowing from Arabic into Persian and subsequently through Persian into Urdu. Urdu has also borrowed a few words directly from the various dialects of Arabic .

I have recently written a post on shared Perso-Arabic words between Urdu and Punjabi. You can find it here-
http://historyview.blogspot.com/2010/09/some-observations-on-perso-arabic-word.html

Keep up the good work.
سلام

im actually iranian so i'm fluent in farsi and trying to learn arabic and the shared words between farsi and arabic definately make it a little easier i think, still challenging though haha, your blog is a great resource thanks for all the lessons the're very helpfull

Hey, I think it's very neat you re trying to learn Persian. I had encouraged my sister to apply for Persian, but unfortunately due to health reasons she had to give it up, and now there isn't any place at all in Romania, where you can study it. I think it will help you a lot also if later on you'll want to learn the Iraqi dialect, there are many words that come from Farsi and don't exist in the MSA, like papush (pa for leg and push cover of face), papush - slipper, it entered even many european languages, like my own. Also other words are chara, treatment, chol, (7aql in MSA). And there are many words in MSA coming from Farsi like bustaan (garden with vegetables) and taazaj (fresh), saadaj (the d is inter-dental), for simple or naive, etc. Good luck with persian! Cheers! And I love all your blog and posts.