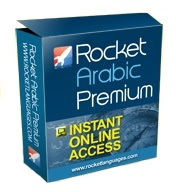 Edit 10/24/2011: There were 40 entries into the drawing and the winner of the language software is bcbeaveratheart! I used a random number generator to pick the winner. I will be contacting them to give them their prize.

I was recently contacted by Rocket Languages and they want to do a free giveaway of their Arabic language software. I did a review of their program here and it will get you a great foundation in Egyptian Arabic. Egyptian dialect is a great choice since Egypt is the most populous Arabic country by a wide margin. It's also used widely in Arabic movies and TV shows and knowing Egyptian will make it easier to learn other dialects as well as MSA. Almost 5 years ago I began my journey to learn Arabic by studying MSA. If I had it to do over again I would have gone with a dialect, either Egyptian or Levantine. MSA is what you need to know if you plan to watch the news, or select TV shows (some cartoons and historical shows are done in MSA), but if you only know MSA and walk down the street in any Arabic speaking country, everything you hear around you is going to sound like gibberish. So, starting off with Egyptian is a good way to go.

All you need to do to enter the drawing is make a comment to this post. Don't post as Anonymous. Choose a name. Include your email in the post so I have a way to contact you if you win. I won't approve the comment so that no one else can see your email address. The winner will be randomly chosen and announced on Sunday, October 23 and then he/she will have 5 days to email me back and claim the prize.

Posted by The Arabic Student at 12:45 AM