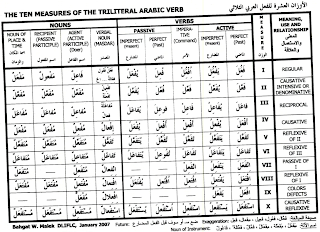 This Arabic verb measure chart (zoom in) is very useful when starting out with Modern Standard Arabic.  You'll need to know these forms just to look up words in the Hans Wehr dictionary.  In Arabic the verbs are usually formed from a 3 letter root, فعل for example.  There are 10 measures in Arabic, which is to say there are 10 different ways that the 3 letter root can be changed.  10 different patterns it can follow.  These changes to the root change the meaning of the verb.  For instance, if you put a shadda ّ  on the middle letter of a verb (meaning you stress that letter), it takes whatever the meaning of measure I was (the normal 3 letter root with no changes) and makes it cause measure I to happen.  As with so many things in language learning, explaining it makes little sense until you see an example.

Another example, the verb جمل (jamala, measure I) means "to be beautiful", but if you use measure II, جمّل (jammala), then it becomes "to beautify, to make beautiful".  You get the phrase جراحة التجميل, "plastic surgery" (literally "beautification surgery") from this measure.

So that's a quick intro into the measure system in Arabic.  The chart on this post lists the 10 measures and how they are conjugated.  The chart is a tad confusing if you aren't familiar with grammar terms.  Under ACTIVE where it says PERFECT (Past), that's past tense.  Where it says IMPERFECT (Present), that's present tense.

IMPERATIVE (Command) is how you conjugate orders and commands.  In English we just say the word.  If I want you to write, I just say "write".  In Arabic you have to change the word a little which the chart shows.  There isn't always a rule that works all the time.  Like for the command conjugation, you see under measure one for commands there are a lot of different ways to do it and they depend on the verb.  For instance, إسمع (isma') is imperative for "listen", but أُكتب (uktub) is imperative for "write".  Sometimes you just have to know and the chart won't help.

Another very important column on the chart is the VERBAL NOUN (MASDAR) column.  That tells you how to change a verb into its noun equivalent.  You'll notice earlier in the post I wrote جراحة التجميل (jirahat atajmeel).  The word تجميل is measure II, even though it doesn't look the same as جمّل .  That's because جمّل (to beautify) is the verb and التجميل (beautification) is the noun.  Usually this is synonymous with adding -ing to words in English.  Like with "write" and "the writing".  In Arabic this is كتب and الكتابة, both are measure I.  If you look at the VERBAL NOUN (MASDAR) column for measure I, you'll see فعالة which is the same form as كتابة. You'll notice there are several different patterns in the measure I verbal noun box, so the chart only gives you an idea of how it might be made.  It isn't a foolproof solution.  For measure II though, the vast majority of the time, it's تفعيل , the same measure as تجميل .  I can't even think of a word that uses تفعلة , the other pattern that it has in the measure II box.

Anyway, I hope this wasn't too confusing.  There's a lot you can analyze when talking about Arabic measures, I just went over some of the most important parts.  Measure IV is another very important one, it does the exact same thing as measure II, just looks different.  Then you have measure VII which makes the word passive, like, "it was written" versus "he wrote".  That's an important one.  The measures don't always work out and a lot of the time you just have to memorize things, but they are worth knowing.

Posted by The Arabic Student at 11:41 PM

You need to the Arabic rules for coining the imperative in Arabic and not that it is arbitrarily coined.